Lasik (Laser-Assisted in Situ Keratomileusis), commonly referred to as laser eye surgery, is a type of refractive surgery for the correction of myopia, hyperopia, and astigmatism. The LASIK surgery is performed by an ophthalmologist who uses a laser or microkeratome to reshape the eye’s cornea in order to improve visual acuity. For most (99%) patients, LASIK provides a permanent alternative to eyeglasses or contact lenses.

In the USA, the FDA has approved LASIK for age 18 and over. More importantly the patient’s eye prescription should be stable for at least 6 months prior to surgery. The patient may be examined with pupillary dilation and education given prior to the procedure. Before the surgery, the patient’s corneas are examined with a pachymeter to determine their thickness, and with a topographer, or corneal topography machine, to measure their surface contour.

A soft corneal suction ring is applied to the eye, holding the eye in place. This step in the procedure can sometimes cause small blood vessels to burst, resulting in bleeding or subconjunctival hemorrhage into the white (sclera) of the eye, a harmless side effect that resolves within several weeks. Increased suction causes a transient dimming of vision in the treated eye. Once the eye is immobilized, the flap is created. This process is achieved with a mechanical microkeratome using a metal blade, A hinge is left at one end of this flap. The flap is folded back, revealing the stroma, the middle section of the cornea.

The second step of the procedure uses an excimer laser (193 nm) to remodel the corneal stroma.

Repositioning of the flap

After the laser has reshaped the stromal layer, the LASIK flap is carefully repositioned over the treatment area by the surgeon and checked for the presence of air bubbles, debris, and proper fit on the eye. The flap remains in position by natural adhesion until healing is completed.

Patients are usually given a course of antibiotic and anti-inflammatory eye drops. These are continued in the weeks following surgery. Patients are told to rest and are given dark eyeglasses to protect their eyes from bright lights and occasionally protective goggles to prevent rubbing of the eyes when asleep and to reduce dry eyes. They also are required to moisturize the eyes with preservative-free tears and follow directions for prescription drops.

Customised LASIK is a variation of LASIK surgery in which, rather than applying a simple correction of focusing power to the cornea (as in traditional LASIK), an ophthalmologist applies a spatially varying correction, guiding the computer-controlled excimer laser with measurements from a wavefront sensor. The goal is to achieve a more optically perfect eye, though the final result still depends on the physician’s success at predicting changes that occur during healing and other factors that may have to do with the regularity/irregularity of the cornea and the axis of any residual astigmatism.


Epi-LASIK is a refractive surgery technique designed to reduce a person’s dependency on eyeglasses and contact lenses. Invented by Dr. Ioannis Pallikaris (Crete, Greece), the technique is basically an automatic LASEK without alcohol:It can be better considered as superficial LASIK. The stromal bed is smoother than that obtained by mechanical methods or brush. Unlike alcohol (LASEK) there is no chance of damaging the limbal stem cells. It is also relatively less painful than LASEK.

The first cases outside Greece were performed in September 2003.

The strategy of Epi-LASIK is to push aside the epithelial cells to expose the underlying smooth basement membrane of the stroma layer of the cornea. 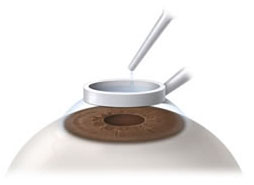 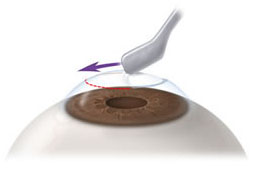 This stromal layer is treated with the laser, and then the epithelial sheet is repositioned. The epithelial cells reestablish their adhesion points, and the cornea has a new contour.

It eliminates creation of a stromal flap with a sharp bladed keratome or intrastromal laser as done in LASIK. Therefore, there is no risk of creating an irregular surface from complications in cutting the flap.

There are clear indications for Epi-LASIK, as opposed to LASIK. From a technical point of view, it is easier, and perhaps safer, to perform on people who have steep or flat corneas, and those who have thin corneas. Patients who have epithelial basement membrane disease, and those who are subject to recurrent breakdown of their surface epithelium may also do better with Epi-LASIK. Those who have deep-set eyes, and small palpebral fissures (distance through the lids) may be predisposed to difficulty with LASIK, and would be more easily handled with Epi-LASIK.


LASEK (laser epithelial keratomileusis) is a newer variation of PRK, a procedure in which laser energy is applied directly to the eye’s outer surface for reshaping and vision correction.

To understand how LASEK works, you first must know the fundamental differences between LASIK, PRK and LASEK:

LASEK is used mostly for people with corneas that are too thin or too steep for LASIK, when it may be difficult to create a thicker LASIK flap. LASEK was developed to reduce the chance of complications that occur when the flap created during LASIK does not have the ideal thickness or diameter.

During LASEK, your surgeon uses local anesthesia. Then he or she cuts the epithelium, or outer layer of the cornea, with a fine blade (trephine). Then the surgeon covers the eye with a diluted alcohol solution for approximately 30 seconds, which loosens the edges of the epithelium.

After sponging the alcohol solution from the eye, the surgeon uses a tiny hoe to lift the edge of the epithelial flap and gently fold it back out of the way.

Then the same excimer laser used for LASIK or PRK sculpts the corneal tissue underneath. Afterward, a type of spatula is used to place the epithelial flap back on the eye.

In a new variation of LASEK, the same plastic blade (epithelial separator) used in epi-LASIK creates the thin epithelial flap. But because alcohol is applied during the procedure as it is in straight LASEK, the procedure is called epi-LASEK with an “E” instead of an “I.”

In many ways, LASEK vision recovery is slower than LASIK recovery, but there are some differences. According to doctors who perform LASEK, the flap edge heals in about a day, though patients usually wear a bandage contact lens for approximately four days to protect the eye.

Refractive lens exchange (RLE) replaces your eye’s clear natural lens with an artificial intraocular lens (IOL) to correct your refractive error and achieve sharper focus, reducing your need for reading glasses or bifocals.While lens replacement surgery technically does not have FDA approval, some eye surgeons will perform the procedure off label in certain circumstances. This is legal and sometimes is the most effective way to correct particular vision problems.

Refractive lens exchange typically is for people with presbyopia or extreme farsightedness, for whom LASIK, PRK or phakic IOL surgery generally are not suitable. If you have both presbyopia and moderate to severe hyperopia, RLE may be the only viable option for clear vision and minimal reliance on glasses after refractive surgery.

Lens replacement surgery also can correct myopia (nearsightedness), but generally it is not recommended when LASIK, PRK or phakic IOLs are available. The procedure for refractive lens exchange is virtually identical to cataract surgery. The difference is that in RLE, the lens being replaced is clear, rather than a cloudy lens due to a cataract.

As in cataract surgery, three types of IOLs are available to replace your natural lens, depending on your vision needs and the health of your eyes. They are:

With intraocular lenses, there is no “one size fits all,” and your eye surgeon will recommend an IOL that is most suitable for your individual needs.